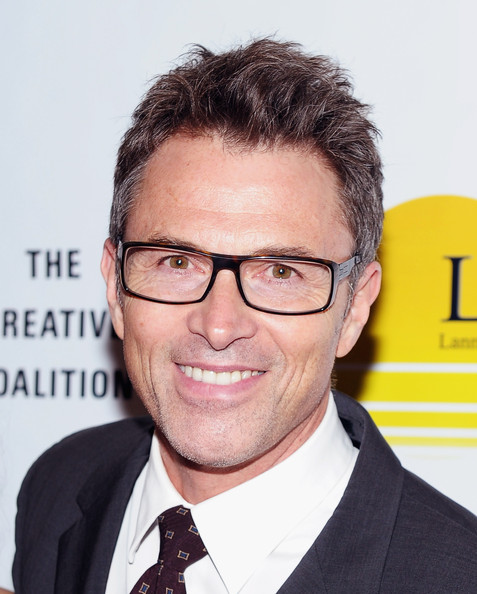 Tim Daly at the Creative Coalition's Salute to Blue Star Families, April 2011
Last week I had an opportunity to put on my correspondent's cap for

bullying_begone and spend a few minutes with Tim Daly. You may know Tim as Pete Wilder in ABC's medical drama, Private Practice, J.T. Dolan in The Sopranos, or perhaps the voice of the Man of Steel in Superman: The Animated Series. Tim is also the president of The Creative Coalition, an organization rallying hundreds of actors, writers, directors, and creative professionals around important social issues. During my time with Tim Daly, we talked about The Creative Coalition, the be a STAR Alliance, and the bullying issue.

Take a look under the cut for my conversation with Tim Daly.

Mike: How did you initially become involved with The Creative Coalition?

Tim Daly: I'd been interested for a while in paying forward some of the success that I've had. It was very difficult for me to decide where to put my energies because, although I care a lot about cancer research, preventing starvation, and various other diseases and causes, I wasn't an expert in any of them. I met Robin Bronk at Sundance about 6 years ago and she started talking about the arts advocacy work that The Creative Coalition does. That really sparked my interest because the arts have given me everything that I have. It's something that I'm passionate about, I know about, and that I have enough gravitas to be able to speak about.

Also, I love that The Creative Coalition would take on causes of nonpartisan social importance in a way that I thought was very smart. In that, it uses the power of the media that our members are able to generate to focus attention on the issues and then letting experts talk about them rather than having to have our people be experts on these subjects. We [artists] could then focus our efforts on our arts advocacy.


Mike: You're now the president of The Creative Coalition. What motivated you to take on this leadership role?

Tim Daly: It sort of happened by accident. Tony Goldwyn and "Joey Pants" (Joe Pantoliano) were co-presidents. Joey was going off to pursue more specific advocacy work of his own so Robin asked me to step in and I just got more and more involved. I got really passionate about it, especially during the last election cycle, when Robin and I came up with this idea for the movie that we produced, called PoliWood, that Barry Levinson directed. I discovered my own passion for the arts and particularly arts education.

I enjoy being the president. It's a difficult thing to do because the problem with an organization like this is that people have jobs. Our members are working full-time doing other things. It's always a struggle to find the time to do as much as I want to do.


Mike: In the past, celebrities raising awareness of social issues have been targets of criticism because of, what looks to me, like a perception that artists are not experts on social issues and therefore have no business speaking out. What are your thoughts?

Tim Daly: In fairness, I don't think that all celebrities can be lumped together. I think the ratio of people who should keep their mouths shut and not talk about things is the same amongst celebrities as it is amongst politicians, and lawyers, and other people. But certainly, there are probably millions of people in the world who would be far worse off, if not dead, if people like Bono were not involved in advocacy. I mean, he's a guy who knows what he's talking about, you know? He's very well respected around the globe. So you can't just lump everyone in together.


Mike: Here at LiveJournal, our primary relationship with The Creative Coalition has been through the be a STAR Alliance.

bullying_begone is a LiveJournal community started by a former victim of bullying to help raise awareness of the bullying issue and support those being affected by it. With that in mind, has bullying been an influential force in your life?

Tim Daly: Of course. It's important to note that there are varying degrees of bullying. But what the initiative is talking about is these severe cases of bullying and it can always be less. The thing is, as our world changes, we really need to show tolerance for each other in terms of all of our differences and try to respect them. It's a good lesson for not only for kids but also for parents and teachers to watch out for the kind of bullying that is really destructive because we've had some incidents in the last couple years of kids committing suicide and horrible things like that. That's obviously not just kids ripping each other on the playground, its a lot deeper and a lot more hurtful.


Mike: One part of dealing with these challenges is creating new avenues of conversation with bullies. Approaching people who may not even realize they're bullies and exposing them to a deeper understanding of the situation.

Tim Daly: Of course. That's one of the things that all of us as a culture haven't quite come to grips with. When we dash off an email and hit 'send,' sometimes we can forget we even did it or we can send it off when were in some sort of mood. There are a lot of different scenarios in which that can be hurtful, dangerous,or certainly annoying. We need to have for ourselves some strategy and use our critical thinking to help us navigate this miasma of technology that we don't really know yet how it will affect us.


Mike: Do you have any words of advice or encouragement for our readers?

Tim Daly: I don't really feel qualified to give advice except to say that so often, young people especially, have trouble seeing that the bulk of their lives will be spent as adults. Being a child, and particularly a teenager, can be difficult and very hurtful in a lot of different ways. But if you can get through it, it's going to be OK!

As I look back on my life, some of the things I thought were so important have just completely vanished in terms of the impact they had on me. Look forward, is what I'd say. Look forward and don't dwell on the pain that you're in. Move on and things will change.


Mike: In closing, what projects can we look forward to seeing you in?